A Grand Celebration of Success: 2000+ Degrees Awarded to 2021 Batch of Students at Manav Rachna Educational Institutions 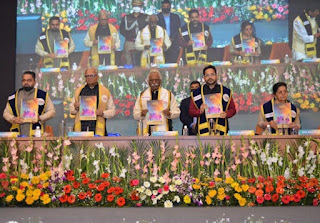 Close to 2000 undergraduate, postgraduate and doctoral students given degrees over two days at Manav Rachna

In a grand celebration of success, around 2000 students (undergraduate, post graduate & doctoral) from Manav Rachna International Institute of Research and Studies (MRIIRS); Manav Rachna University and Manav Rachna Dental College were awarded with their treasured degrees at a solemn Convocation Ceremony organized at the campus of Manav Rachna Educational Institutions on December 18 & 19.

Sh. Bandaru Dattatreya, Hon’ble Governor of Haryana presided over as the Chief Guest and Sh. Atul Kothari, National Secretary, Shiksha Sanskriti Uthaan Nyas as the Guest of Honour on the second day. The first day was presided over by Dr. Mahendra Nath Pandey, Hon’ble Union Minister for Heavy Industries as the Chief Guest and Sh. Krishan Pal Gurjar, Hon’ble Minister of State for Heavy Industries and Power as the Guest of Honour.

11 stalwarts from industry, academia and administration Heads were bestowed with Honoris Causa degrees in recognition of their unparalleled contributions:

89 students were given medals for outstanding achievement and academic proficiency. Yuvraj and Yashraj Bhardwaj, two star achievers of the Manav Rachna University with 36 research projects and 15 patent applications to their credit were awarded with the Vice President’s medal for Innovation & Entrepreneurship.

Sh. Bandaru Dattatreya congratulated the graduating students and Honoris Causa recipients. He said, “This Convocation Ceremony is a result of the relentless efforts of the students, faculty members and management alike.” He said that Education helps in the overall development of an individual; therefore, different aspects should be adopted to ensure this.

Online as well as practical mode should be accepted for the same. He also shared how New Education Policy 2020 will give a new face to the education through inclusive education, sports culture, technology and innovation. He also urged students to be the job-creators rather than the job seekers, pointing towards the emphasis being given on skill development.

While delivering the Convocation address, Dr. Mahendra Nath Pandey addressed the graduating students and said, “The professors of your university prepare you for the future and transform you into complete professionals. Move ahead by creating a balance between your thoughts and dreams, and maintain a positive attitude.” He advocated graduates to step ahead by adopting three virtues: Helping attitude, health for all, and connecting your efforts to your nation. “Give importance to your foundational knowledge, your society, and your values,” he added.

Guest of Honour & Honoris Causa recipient Sh. Atul Kothari said, “Convocation Ceremony implies that you have completed your formal education.” He urged students to think about their responsibilities towards their life and society.

Guest of Honour and Honoris Causa recipient Sh. Krishan Pal Gurjar said, “The University has always believed in instilling self-confidence in its students and preparing them for life. Our Constitution enshrines both our rights and our duties. One of the duties it reminds us of is to strive for excellence in all spheres so that our nation constantly achieves greater success. I am happy to know that Manav Rachna University is making major contributions in this direction”.