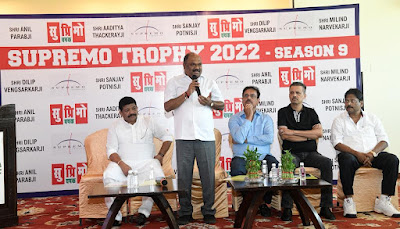 The 9th edition of Supremo Trophy Tennis Ball Cricket Tournament that is to be held in Mumbai from 24-28 May 2022 will be a grand event that probably can be claimed as the India’s version of World Cup of Tennis Cricket. This year 16 teams from all over India will be playing 15 matches at the AirIndia Sports Club Ground, Kalina in Santacruz Mumbai and it has grand prizes like Maruti Car among cash prize of Rs 9 Lakh for the winning team.

“We can pick up good cricketers for our national team from this tournament,” observed the Colonel of Indian cricket Padmashri Dilip Vengsarkar amidst the presence of Transport Minister of Maharashtra Dr Anil Parab who is also the co-founder of this tournament along with Shivsana Vibhagpramukh MLA Sanjay Potnis and the Mumbai Premier League Chairman Milind Narvekar.
Supremo Trophy has live coverage of all its matches that is being viewed in 22 countries on YouTube and it has gained such popularity that top cricket teams from the Gulf and Sri Lanka have evinced interest in participating in this tournament. Established in 2010 the tournament has grown leaps and bounds except for its adjournment during 2019, 2020 and 2021 due to Corona Pandemic. The 8th edition of this tourney witnessed the attendance of several National Cricket Stars and hockey players, Bollywood and Television stars and the Internationally Most Respected Corporate Business leader Shri Ratan Tata also graced the event.
Founder of Supremo Cricket Tourney the Shivsena MLA Sanjay Potnis credited Transport Minister of Maharashtra Dr Anil Parab to have lent his support for this sporting event which has served several Social Causes with the latest being adoption of 7 Adivasi villages in Raigad District by the Supremo Foundation. A fund of Rs 10 Lakhs was made available for the drought-stricken people in Maharashtra and 22 Heart surgeries have been performed by the Supremo Foundation who has also adopted poor and budding students to provide them education and inspiration.