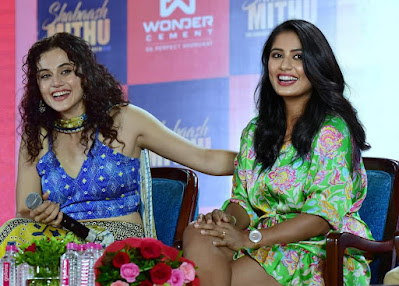 Cricketer Mithali Raj and Bollywood actress Taapsee Pannu promoted their upcoming film Shabaash Mithu and took part in a press conference at Hotel Marriott on Tonk Road in Jaipur on Sunday. During this, both of them put their point of view in front of everyone and answered the questions related to the film. Along with this, both went to a sports academy in Jaipur and played cricket with women. Prizes were distributed to the winning team. Arun Lodha of Sports Academy said, “Both the stars were excited to come here among the common people”.

Mithali told me that not like Virat in my career, but during a series, there was a bad phase. At that time my coach and teammates motivated me and I was able to come back. Talking about my career, I used to learn classical dance, but my father put me in cricket and started playing cricket from an early age. This is the reason, I have never been able to play street cricket. Now after a long career of 23 years, I am motivating the new generation.

Taapsee told me that my coming to Bollywood was an accident. I wanted to be happy working. Today it has been 12 years in the industry. Nothing was planned. There was no guide and no support. Maybe I’m here because the public wanted to see me. I believe that my life is doing well. 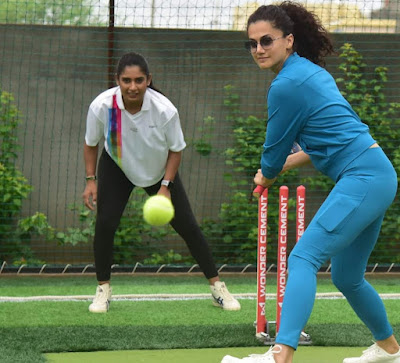 Mithali’s life has been shown in the movie as it was. There is nothing interchangeable in this. When the movie came to me, the script was not there. The producers wanted me to learn cricket. I was excited that I am getting a chance to do this movie. Because for the first time a movie was being made on Woman Cricket. When I had to play cricket, I thought, why didn’t I play cricket earlier in life? And if not played then why did yes to the movie. Because two hours of the first day were spent only catching the bat. My neck was hurting a lot, but I wanted to give my 100 percent.

“My Mum takes care of a colony of 500 stray cats and keeps 9 cats at her flat who have one or another disability so are less prone to be adopted”, says actress Giorgia Andriani on adapting love for animals in herself

“My most memorable was relishing a plate of home made, hot crispy malpua’s and ginger chai with my family during the rains!,” says actress Seerat Kapoor as she recalls her favorite Monsoon memory.

"My most memorable was relishing a plate of home made, hot crispy malpua’s and ginger chai with my family during the rains!," says actress Seerat Kapoor as she recalls her favorite Monsoon memory.