Dr. A.K. Mishra’s film “Aamantaran” is an invitation to the Jammu Kashmir’s beautiful Valley of Bhaderwah 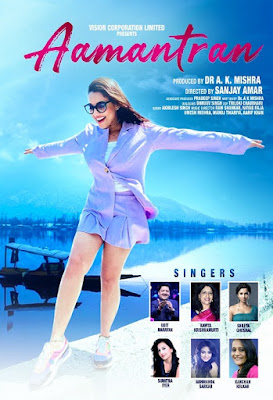 26th Jan 2022, Mumbai: When Veteran Producer Dr. A.K.Mishra was conceiving his ambitious story, he was looking for some naturally beautiful location as the backdrop of his story and his search ended up at the pristine valley of Bhaderwah of Jammu Kashmir. Whenever it comes to Jammu and Kashmir, it remains confined to the valley of Kashmir, whereas there are many other places of tourist potential. Dr. A. K. Mishra’s mature romantic film “Aamantran” is an attempt to promote and project such an undiscovered place of J&K.

The story is inspired by today’s real-life when every person is getting weak emotionally. The protagonists of the story are battling with their inner dilemma. The story is conceived by the producer Dr. A.K Mishra. The direction of the film is helmed by Sanjay Amar while Pradeep Singh is the Associate Producer.  It’s a mature love story that will surely be a visual delight for the audience.

Musically, the film is going to have songs sung by the veterans like Late Jagjit Singh, Kavita Krishnamurthi, etc. When director Sanjay Amar is approached, he brightly said,“ Dr. Mishra himself is a novelist and has an experience of life. His way of looking at life is quite different from ours, and that is the catch point of the film. When he narrated his idea of presenting the emotion of love maturely, I simply got intrigued”.

The film is going to be shot in beautiful locations of Bhaderwah valley and the shooting is going to kickstart in the first week of February month. The seasoned actor Ashwin Dhar is playing the pivotal character in the film, while Kanupriya Sharma and Pamela Mondal are the female leads. Dr. Mishra has emphasized tapping the local talent for Jammu & Kashmir in the film for giving it a realistic feel in terms of presentation and dialect.

Dr. Mishra strongly believes that cinema means having the visual experience in theatres and during the covid times when people have got stuck inside their houses, the mature films are much needed to bring back the glory of cinema theatres. “Aamnatran” which means invitation is such an effort for Dr. Mishra, and he is planning to release the film in the theatres in the mid of this year.