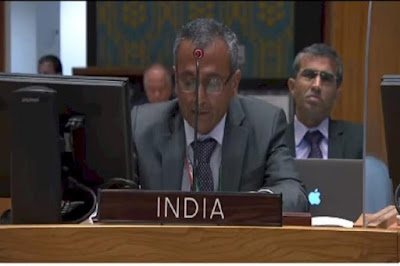 India maintains that it has an important place in the peace and prosperity of the Middle East through the newly formed I2U2 Group. It is confident that it will make a significant contribution to the energy, food security, and economic progress of the region and South Asia. This group of four countries includes India, Israel, United Arab Emirates (UAE), and America.

During the open debate on the Palestine issue in the United Nations Security Council (UNSC), India’s Permanent Representative R Ravindra said, during the recent virtual meeting of the I2U2 Group, India, Israel, UAE, and the US in six key areas water, It was agreed to increase joint investment in energy, transport, space, health, and food security. In a joint statement issued after the virtual meeting on July 14, it was said that the objective of this elite group is to meet the challenges facing the world with joint investment and new initiatives in the fields of water, energy, transport, space, health and food security. To do.

US Ambassador to the United Nations Linda Thomas-Greenfield said President Biden expressed the prospect of closer cooperation with Israel and other countries, both in the region and outside, during the virtual meeting. Ravindra expressed concern over recent developments between Israel and Palestine, especially violent attacks, killings of civilians, subversive, and provocation. He said, India always opposes such incidents and advocates for stopping them completely. He stressed that long-term peace and stability in the region are not possible without a political agreement between Israel and Palestine. He said the international community should step up political efforts to revive the peace process in the Middle East. He advocated for an early resolution of the issue through the political process.

India has been a frequent advocate of direct peace talks between Israel and Palestine. Ravindra said we believe that this is the best way to achieve the goal of creating two countries. This dialogue should be in accordance with the agreed framework of the international community. It should take care of the Palestinian people seeking a separate country and the security concerns of Israel. The international community and the Security Council must send strong signals against any attempt to disrupt the peace process between Israel and Palestine.

India emphasized the need to urgently address the security and economic concerns of the parties to the matter. In this, discussions on the financial situation and political issues of the Palestinian Authority are prominent. “We are aware of the steps Israel has taken to increase the confidence of the Palestinian people in the international community and to improve the economic situation in Palestine,” he said. Such initiatives are important for both sides and eliminate the possibility of terror and violence while maintaining stability.

This One Mushroom Can Make Old Age Comfortable