Suresh Bhanushali and Photofit music with Director Amit K Shiva rejoined for another new single “Jogan” to be released soon which depicts a larger-than-life arrangement and illustrious tale of love. The song is aesthetically shot keeping roped up with the intricacy of the relationship.

After smudging passionate chemistry in “Chand” starring real-life couple Sambhavna Seth and Avinash Dwivedi, Director Amit K Shiva has already created a buzz with “Jogan”. “Jogan” is a twisty story, with a grand imposing and epic saga of love. The screenplay by Mr. Amit K Shiva is exceptionally powerful and compliments his Direction as well which is proven after the teaser launch. The teaser has already created a huge hype on social platforms.

He says the fabulous perception of “Jogan” is a motivation from Sanjay Leela Bhansali’s films and his extensive inclusion of the relative multitude of components of style that he utilizes. The legendary filmmaker has always been an inspiration for me.

Mr. Amit K Shiva further adds, Nishant Malkhani and Saba Khan have beautifully painted the dynamic and sensual eternal love story, while keeping intact the imperial and traditional essence of the song, on the other hand, Vinit Kakar a belligerent brother has hooked till the end with his performance. 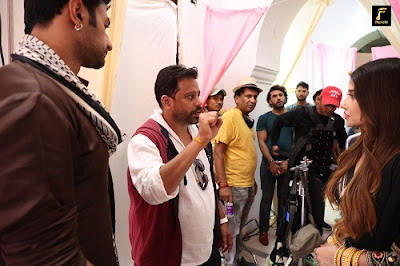 Furthermore, Mr. Rajiv John Sauson Photofit Music adds, this song is one of the staggering Modern Sufi that cant is left unheard and the actors injected their pathos into the role to make it so real. Every beat of “Jogan” will surely be felt.

Also, Music and creativity run in the blood of Mujtaba Aziz Naza, the forte of the singer is Qawali, and has shared his vocals with Sanjay Leela Bhansali’s Qawali “Aayat”, AND “Deewani Mastani” from “Padmavat” and “Ek Dil Ek Jaan” from “Bajirao Mastani” which was humongously popular and now “JOGAN” is another feather in the hat for the singer.

Suresh Bhanushali and Photofit Music have successfully picturized a colorful love story from a Royal Rajasthani standpoint with a heart-sinking tale of love. the project was led by project head  Mr. Rajiv John Sauson Photofit Music.

“Jogan” is a song that will strike more with the Indian masses as it has more of a traditional touch. We have considered every minute bit of authenticity in this song to make it as pure as possible says, Producer Mr. Suresh Bhanushali.

Director Amit K Shiva added, “Jogan” is not only a visual treat for Music lovers but also for couples truly in love and will surely resonate with the fearless story that we are trying to portray. An attempt of Photofit Music with this poetic Sufi single will undoubtedly capture millions of hearts.