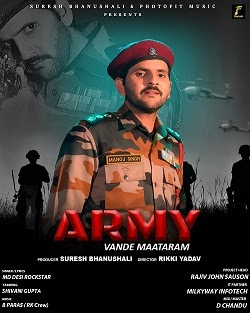 This Republic Day falls in the 75th year of  India’s Independence so, in the pipeline of celebrating this Azadi ka Amrit Mahotsav, Photofit Music Releases it’s another music video “Army” featuring MD Desi Rockstar, who has delivered chartbusters in his music career, spanning over the past years.

This patriotic song “Army” produced by Mr. Suresh Bhanushali and Photofit Music defines that aspiration to be a part of the highly-respected profession, joining the Indian Army. We have a series of iconic patriotic songs that serve well to the emotions of army men, which has always hit that patriotic expression and endless love towards the nation.

The singer MD Desi Rockstar, as he expresses his words for the song says, “This project is simply close to my heart, a tribute to our pride holders, Soldiers of Indian Army. The music video is a must-watch and has penned the lyrics with that fulfilling energy of patriotism and love towards the nation”.

The parodies run around the story of dreams to be a part of the Indian army. The spectacular visuals of the song “Army” released by Photofit Music, have left everyone with a feeling of pride. The Indian army has always lifted the nation’s flag high up states Photofit Music, Mr. Suresh Bhanushali. Each individual who is aligned for the Indian Army stays aware of the effortlessness and endeavours to carry more regard to the assignment, as time passes.

Keeping the spirit of patriotism high, Photofit Music has previously served Shortfilms like “I love Bharat” and other songs colliding with different languages and several genres. Keeping up with the close approaching republic day, the producer Mr. Suresh Bhanushali and Photofit Music is releasing another song in respect of army and the soldier men’s, retaining that authentic essence. The project “Army” has been run over under the close speculation of Mr. Rajiv John Sauson, project head, Photofit Music.

The music video  “Army” produced by Mr. Suresh Bhanushali and Photofit Music, has been creatively shot with the rural backdrop and serves in the best of emotions, uniquely picturized by the director Rikki Yadav. The project head, Mr. Rajiv John Sauson states; The storyline of the tune  “Army”  by Photofit Music revolves around a hopeful dream to enlist in the Indian Army. The opinions lined up with it and sentiments aligned. Where The stupendous visuals of the tune army have left everybody with a sensation of pride.

Just as various army men quotes, one is them is here;

This Republic Day, Photofit Music brings in the treat. The track that justifies the true essence of this big day. Bringing out the core emotions of protecting the country and being that shield that outshines even brighter than glitters. The song “Army” released by Photofit Music is wrapped in that surreal feeling, truly dedicated to verticals of patriotism, says Mr. Rajiv John Sauson, Photofit Music.

The melody  “Army” produced by Mr. Suresh Bhanushali and Photofit Music is enveloped by that strange inclination, genuinely committed to people’s sentiments. The music name has delivered a track “Hum Haar Nahi Maante” with Ganesh Acharya and other people who have been indistinguishable pieces of the Entertainment Industry brought into reality with concept and visualisation by the director, Photofit Music, Amit K Shiva.

Tending to that Soldier’s heart, Soldier’s Feeling this melody is one amazing track that contains every last bit of it, at its ideal.