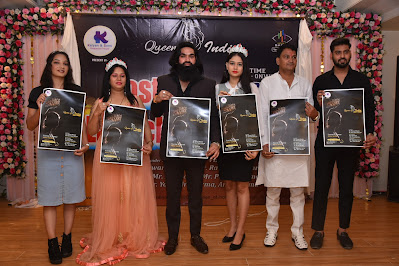 National level beauty pageant “Queen of India Season 2” is going to be organized by Kalyan & Sons Production House at Hotel Safari located on Gopalpura Road in Jaipur on Friday with the aim of giving wings to the girls who believe in modeling as their career. A press conference and poster reveal ceremony was organized. Where the poster of this event was revealed by the organizers and guests of this pageant and the information about the event was shared with the media.

The event’s director Monu Verma, organizers Anil Saini and Prem Sharma, and co-founders Pawan Bhinda and Ravikant Sharma told that this is the second season of this national-level beauty pageant in which more than 500 models above 18 years of age will participate from across the country. The objective of this event is to promote modeling and give maximum opportunities to the local talent of the city in this field.

He further informed that a 7-day grooming session will be organized for all the participants before the grand finale. The grand finale of this beauty pageant will be held in the pink city Jaipur in September this year.