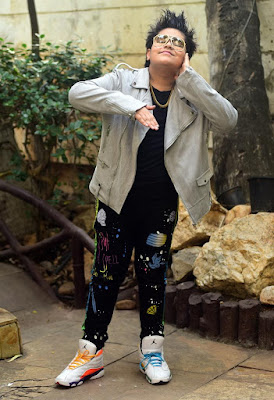 Mumbai : Already hailed by audiences from all over the world for his first ever song ‘ *Bachcha Party* ’, we saw the Global Superstar *Rego B* surprise us each week by singing pieces from the list of emblematic of his Grandfather Bappi Lahiri’s list in his own unique style. This time, he took to the next level to surprise us, as he gave his fresh take to one of the most famous International song ‘ *Sacrifice* ‘ sung by Elton John.
‘ *SACRIFICE* ‘ is a Ballad by the English musician and singer Elton John. The song was written by Elton John and his collaborator, Bernie Taupin. The song appeared on the 1989 album ‘Sleeping with the Past’. It became John’s first solo single in the UK Singles Chart, remaining on the top spot for many weeks. By remaining loyal to the song and respecting its composer in spirit, Rego-B gave the song a special touch in his unique style.
Rego B has music in his blood, he has the style and energy of his grandfather that he had in his heyday. Rego-B has not only shown an excellent talent at singing, he has also shown sensitivity and appreciation of soulful music with this attempt of remaking a song that is glued to the psyche of more than two generations.
Rego-B was selected to sing and feature in the Bachcha Party song following a very tedious process of multiple rounds of auditions. Shameer Tondon, the composer of Bachcha Party, is entitled to receive the credit for finding this wonder child through a large bunch of kids recommended by a reputed music school in Mumbai.
Speaking about this new youtube video Rego-B said, “I’m a huge fan of western classical music and pop. I also listen to hip-hop and rappers. I love Michael Jackson, Elton John and Ed Sheeran and listen to all their songs. I get a lot of inspiration from them. In this attempt, I did nothing but expressed my love for this song and its magical feeling.”
Rego B is now gearing up for the release of his next song ‘Kal Chutti Hai’.
https://youtube.com/shorts/Bs8k6mPLREg?feature=share