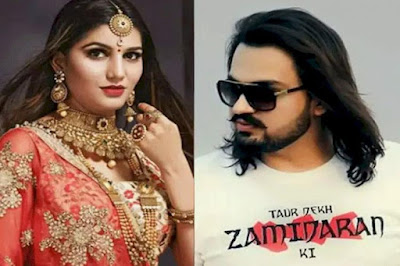 Talking about Haryanvi singer and dancer Sapna Choudhary, she has become a big name since Bigg Boss. Yes, Sapna may not have been able to last long in Bigg Boss, but her fan following has increased a lot. Not only this, but when Sapna came out of the Bigg Boss house, she surprised everyone with her tremendous transformation. Apart from all this, the most discussed was the marriage of Sapna Choudhary. Most of Sapna’s fans would have to know that she had kept her marriage and pregnancy hidden in the early stages. When Sapna gave birth to a son, the fans came to know about her marriage and pregnancy.

In the midst of all this, the fans were always excited to know how Sapna and Veer’s love story came to fruition. Sapna, while talking about this during an interview, had said that when she met Veer Sahu for the first time, he did not like her at all. However, gradually Sapna started taking interest in Veer. Although Veer did not take interest in the dream even then. Talking about her husband, Sapna had said in the interview that she is not interested in any identity at all. Veer has many big projects in acting, writing, and modeling.

Sapna while praising her husband said that he does the same work as his name. Recalling the first meeting, Sapna said that for the first time around 2015 and 2016, we met in a program organized in Ladwa Gaushala, Hisar. When Sapna saw Veer for the first time, she was bitter. Sapna told that there was such a person Veer who neither liked to talk to anyone nor did any jokes.

While remembering the second meeting, Sapna Choudhary said that they had met at an award show. But Veer Sahu had ignored the dream during this time. Sapna further told that when she started talking to Veer, she became shy, along with her expression it seemed that now she has to talk. Slowly Sapna and Veer started understanding each other. At that time Sapna realized that Veer is such a person, from whom he cannot stay away.