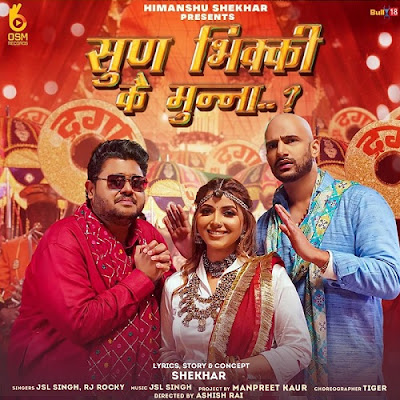 OSM records achieved another milestone with it’s new Haryanvi song release, “ Sun Bikki Ke Munna” where in few of the supreme artists have worked and showcased their talent, Not to forget these artists are also topnotch youtubers. Song Sun Bikki ke Munna, released with an amazing response and is letting the listeners grove on its beats. Sung by JSL Singh, RJ Rocky and penned by Shekhar. Music composition is done by JSL Singh. Tune to the song and make your party lit.

JSL is well known Music producer who has already worked on a lot of banger music videos. He has produced the music of Bikki munna with which he marks his presence in Haryanvi music.

Osm records is a leading music label since four years which covers the whole of PAN india. The label has worked with the biggest music artists and has topped the charts with its amazing songs.

The man behind OSM Records, Himanshu Shekhar, a supremely talented producer, director, poet and a lyricist has put his heart and soul in the making of “Sun Bikki Ke Munna”. He has turned his vision into reality and has given life to the lines of this crazy Haryanvi song. He has made his mark in the direction with Shaqi balma and is lined up for many others. Not to forget his poetic side, he has written over 80 poetry’s which are yet to get released.

Adding more to it, Manpreet kaur, The director of OSM records, Not only she stands as a hard rock for OSM records but also has been a part of many blockbuster music videos and is now all ready to blow your minds with her beautiful and charismatic looks in Bikki Munna. Get ready to be swayed by her beauty in this fun song.

You are surely going to love the beats and groove to them the moment  they fall into your ears.

Big names from the music industry “ B Praak, Afsana Khan, Saajz, and Jaani” come together to signup their wishes for D Sanz’s “Mashallah” by Photofit Music