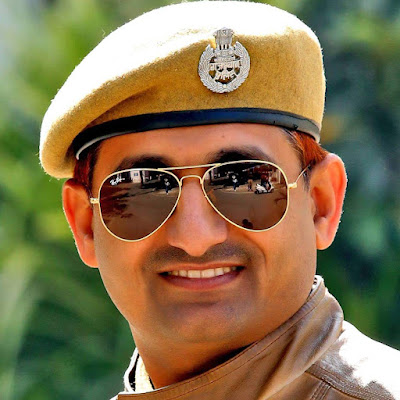 Today we are going to tell you about a person who has proved by his work that if there is a passion to serve the public, then position, place etc. become secondary.Yes We are talking about Sunil Bishnoi, a cyber warrior who came out from the village of Khede in Rajasthan, let us introduce you to his life. Joined the police department in Udaipur district in the year 2001.

While working in the police, most of the time worked in various branches of the office of District Superintendent of Police Udaipur.  In which he worked prominently in District Special Branch, Passport Branch, Crime Branch and Cyber ​​Crime Branch.  During his work, he always remained the favorite of high officials due to his hard work and dedication.

Because of his father’s own police officer, he took the job of police as a passion and chose it. Working in the office of the Superintendent of Police, in the year 2006, Sunil Bishnoi was selected for the All India Police Duty Meet in which a total of about 25 policemen from each rank across Rajasthan are selected. Sunil Bishnoi was the first policeman of Udaipur district to be selected for All India.For which the then Superintendent of Police honored him.

After that revelation, Sunil Bishnoi went to Mumbai with the team to catch those vicious criminals and gangsters of Mumbai.  After this incident, when any major crime happened in Udaipur district, Sunil Bishnoi was kept in the teams formed for the disclosure and investigation of that crime and Sunil Bishnoi in the control and disclosure of many more big crimes of the city.  played an important role.

Sunil Bishnoi was with the officers in the important work of training all the police officers and employees of Udaipur range in the assembly elections in the year 2013, due to which he was honored with a certificate by the Inspector General of Police, Udaipur Range.

In the year 2014, the vicious criminal of Udaipur city, Shakir was caught bravely with loaded pistol and brown sugar, without caring for his life, due to which the Superintendent of Police also honored him.  In a case of police station Ghantaghar, the accused wanted in the kidnapping of a minor girl for about 1 year, being traced to Hyderabad while living in the Internet and Cyber ​​Crime Branch, and the Inspector General of Police, Udaipur Range, who brought him to Hyderabad and brought him honored Sunil Bishnoi.

In the year 2014 itself, Sunil Bishnoi was promoted at the departmental level, after which he was appointed as the in-charge of the city’s Savina police outpost.  There, working hard and diligently for about one and a half years, Sunil Bishnoi accomplished the work of his responsibility with full dedication and hard work, due to which many times the officers praised and honored.

While being in charge in Savina Chowki, eight silver idols of about two hundred and fifty years old were stolen from the Jain temple of Sabina, which exposed the serious incident by tracing the unknown miscreants by the team of Sunil Bishnoi.After working as in-charge of Savina Police Outpost for about one and a half years, Sunil Bishnoi was posted as Police Outpost in-charge of Madri Industrial Area of ​​the city.While working at Madri police post and Pratap Nagar police station, Sunil Bishnoi uncovered many cases and made special contribution in maintaining peace and order in the area and society.

In which, especially in the case of demanding ransom from a diamond dealer by international calling, traced the unknown accused from West Bengal and after reaching West Bengal, arrested the said accused, which was highly praised by all the officers and also honored Sunil Bishnoi.  In many cases, he played an important role in arresting the absconding gangster with weapons and smugglers with illegal liquor and drugs.

Thus Sunil has become a well-known name as the cyber warrior of Rajasthan.  Today, if any kind of cyber crime happens with the general public, then she just rightly reaches Sunil as a cyber messenger and tells about her problem – crime and Sunil Bishnoi and Rajkumar Jhakhar stop cyber crimes with their understanding.  Provides peace to the people.