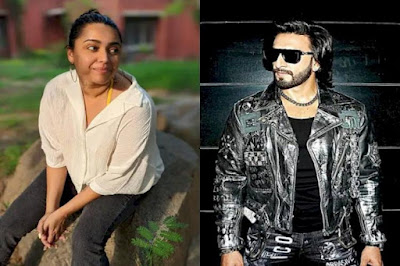 A nude photoshoot of Bollywood actor Ranveer Singh has created a ruckus from social media to the road. Not only is the actor being trolled badly on social media, but there is also a protest against the actor on the road too. An FIR has been lodged against Ranveer in Mumbai’s Chembur and Thane. On the other hand, there are celebs who are supporting Ranveer Singh. Meanwhile, Swara Bhaskar has also reacted to the ruckus over nude pictures of Ranveer. Swara has reacted to the FIR against the actor and called it stupid.

Swara has retweeted a tweet in which the FIR has been written against the actor. Retweeting this tweet, the actress wrote, ‘Unbelievable…stupidity and unemployment prevail in our country at the moment.’

Let us tell you that a case has been registered against Ranveer for spreading obscenity and other charges. Advocate Vedika Choubey said, “I have filed a complaint with my husband Abhishek Chaubey’s NGO on this issue with the Chembur police on Monday. The police have taken cognizance and registered an FIR on the NGO’s petition.” The couple has argued that Singh’s photographs hurt the sentiments of women and hurt their dignity, which has been shared by the actor on various social media networks.

Following a written complaint by the Choubey couple, the Chembur police slapped Indian Penal Code sections 292 (sale of obscene books, etc.), 293 (sale of obscene material to youth), and 509 (saying words with intent to outrage the dignity of a woman, indicating do or act) and an FIR has been registered under the provisions of the Information Technology Act. The complainant alleged that the actor has hurt the sentiments of women in general and has hurt their sentiments through his photographs.

When Yogi Showered Flowers On The Kanwariyas, Owaisi Raised The Question, Said – Why Love One And Hate The Other?

Shamita Shetty And Rakesh Bapat’s Relationship Did Not Last Even A Year, The Actress Announced The Breakup

Shamita Shetty And Rakesh Bapat's Relationship Did Not Last Even A Year, The Actress Announced The Breakup