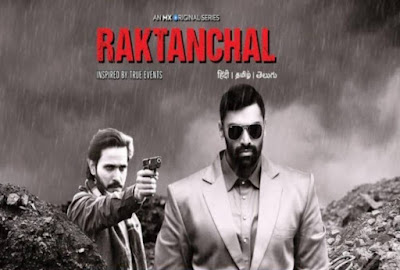 Raktanchal season 1 plot was set in the 1980s of Purvanchal and was inspired by the true events. It was the story of Waseem Khan (played by Nikitin Dheer) who ruled the tender mafia in  Uttar Pradesh, who was also involved in the smuggling of arms and ammunition. The story revolved around Vijay Singh (played by Kranti Prakash Jha) and Waseem Khan, who were constantly at loggerheads and leading to a series of bloodbaths. Khan was challenged by the antihero Vijay Singh, who held high morals and wanted to become a civil servant until Khan’s gang murdered his father Virendra Singh (played by Gyan Prakash). While Vijay was determined to take revenge of his father’s murder, who was killed by Waseem’s company, while Waseem was determined to hold on to his power come what may.

According to the Season 2 trailer,  it promises to be turned into a political scenario this time, the earlier season was revolved around the vengeance and gangs war. Mx Player captioned it, ” Iss Baar Ranneti Nahi, Rajneeti Banayega Purvanchal Ko Raktanchal.” In Raktanchal season 2, people are aspiring to see actors like Soundarya Sharma, Ashish Vidyarthi, Mahie Gill, Karan Patel, Kranti Prakash Jha, Mukesh Bhatt, Vikram Kochhar and Nikitin Dheer etc. As the matter is under dispute, audience of this series may have to hold themselves to see the series on screen. MX Player and the other secondary production house reaching out to the actors, vendors and technicians for the NOC (no objection certificate) illegally so that they can release the Raktanchal season 2 content in the OTT platform.

We really hope, the dispute of the series should get a resolution so that the audience no need to wait to see the content. On the other side, if the dispute won’t be settled in near future, there might be a question of seeing  Raktanchal season 2 in MX Player. MX Player is the OTT platform in the country known for series like Aashram, Raktanchal, Bhaukaal, Matsya Kaand, Ek Thi Begum etc.

‘The Naughty Twins’ land a role in ‘Kaun Banegi Shikharwati’