The Festival will conclude on Tuesday, with the offline screening of 22 films from 8 countries 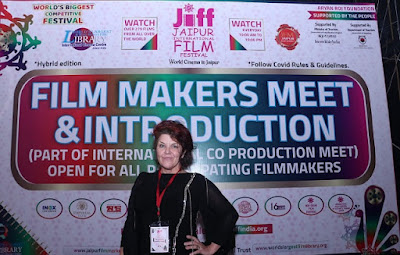 JAIPUR | 32 films from 15 countries were screened offline on the fourth day of Five days going Jaipur International Film Festival, and filmmakers shared ideas about a variety of subjects. They all expressed their enriching journeys of filmmaking.

“I have come to India for the first time 35 years ago, and since then I have been exploring the mysteries of the Planets”, said Jeanette Groenendaal, a filmmaker from the Netherlands. Wearing a smile on her face, Dramayama film director Jeanette asserts that she was fascinated with the planets when she was hardly four years old and this fascination brought her to India. She has spent such a long time in the Navagraha temples of South India, that now she understands them so well, that she can even tell about the history of those temples to tourists and local people.

Jeanette mentions the mysterious history of ‘Maya Temples’, which are gradually disappearing from the world, and western people are speculating about it. Further, Jeanette says that through Jaipur International Film Festival and such platforms, she wants to establish a bridge between India and Netherlands, so that cinematic pieces can be exchanged between the two countries. There is a sparkle in her eyes when she mentioned Hindi Cinema and happily tells that she loves Indian Films, as they ‘move’ you emotionally and psychologically.

An actor from Kolkata, Kaushik Chakraborty felt short of words when he started appreciating Jaipur International Film Festival. Playing the lead actor in the film 50th Anniversary, Kaushik says that his experience at the film festival is amazing and beyond words. Despite the dangers of the approaching third wave of COVID, the beautiful way JIFF has been organized is worth praising. Kaushik said that he enjoyed the screenings of many films here and his favorites have been Oriya film Daal Cheeni and Polish film Leader.

Sharing about their film Dal Cheeni, Peenaki Singh and Shishir Kumar Sahu said that it has been a film of adventures. Remembering the experiences of shooting, Shishir mentions that Dal Cheeni is a travel story, and the film was shot at highway and that too in bone-chilling cold, which was incredibly difficult. Shishir mentioned that it is not easy to make a film in regional language for an independent filmmaker, but they somehow managed to do it. On the other, Peenaki tells that she felt super delighted to have her film screened at Jaipur International Film Festival, and such festivals are big hopes for filmmakers like them.

“If you want to make a film or share a certain story, then make the film without worrying about resources”, these were the words of Ravindra Kelkar, Producer of the film A Nomad River. Directed by Aditya Patwardhan, A Nomad River is a film about climate change and river water crises in India.

Ravindra tells that this documentary feature film was very interesting to be made as they traveled the whole of India in the company of Sadguru Jaggi Vasudev. Mentioning JIFF, Ravindra asserts that he has come to JIFF for the third time continuously and here he got an opportunity to interact with national and international filmmakers, producers, and cinema specialists, which is such an enriching experience.

Asma Khan, the rising fashion designer of the city, celebrated her birthday with great enthusiasm