The Fire Broke Out In Mumbai’s Film Studio, Shooting Of This Big Actor’s Film Was Going On 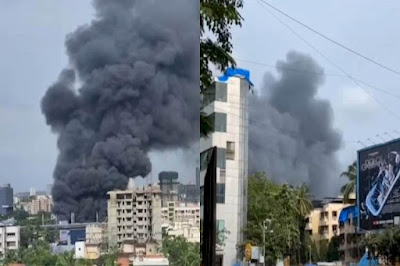 Bad news has come out about a film studio in Mumbai on Friday evening. A fire broke out at a film studio in Andheri, which is so fierce that balloons of smoke can be seen from several kilometers away. It is a matter of relief that there was no loss of life in this accident.

The news agency PTI also informed about the accident and earlier told that the fire started in a shop around 4:30 pm, but later confirmed that the fire started in the film studio. Which was built at Chitrakoot Ground, located next to Andheri Sports Complex near Link Road. The intensity of the fire can be gauged from the fact that smoke is visible throughout the darkness. As per reports, three fire tenders are engaged in relief work.

Some videos of the accident have also been shared by the paparazzi on their Instagram accounts. Let us tell you that there are many film sets including Yash Raj Studio, Fun Cinema, and Balaji’s office near the studio where the fire broke out.

According to a report in ETimes, the fire broke out on the sets of director Luv Ranjan’s film where he was supposed to shoot for his film with Ranbir Kapoor and Shraddha Kapoor. According to reports, Sani Deol’s younger son Rajveer Deol was shooting for his debut film under the banner of Rajshri Productions near the studio where the fire broke out and was in the middle of the scene when he got the news of the fire. The shoot was called off as soon as the accident was reported and the studios were immediately evacuated.

However, the incident has not been confirmed by Ranbir Kapoor, Luv Ranjan, and their team yet. Therefore, nothing can be said with certainty about whether the fire broke out on the set of his film and whether any of the cast and crew of the film was present on the set at that time.