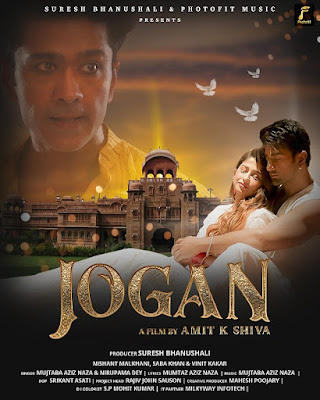 “Jogan” a soulful love song released by Photofit Music label is impressing the audience with its beautiful Royal theme yet very traditional. Suresh Bhanushali and Photofit Music have been an inspiration for their fans, for their remarkable work, time and again topping the charts with crushing hits. “Jogan” is just another feather in the cap for them that has already crossed more than 1 Million immediately post-release.

An attempt of Photofit Music with this poetic Sufi single is undoubtedly capturing millions of hearts.

“Jogan” is created by Mr. Suresh Bhanushali and Photofit Music which is just not a love story but a twisty tale with a grand imposing and epic saga of love that the audience couldn’t have thought of. The story is roped in with being fearless in love as true love always destroys all impediments. The grace of the song is beautifully portrayed by charming Saba Khan and audience favorites Nishant Malkhani and Vinit Kakar who have left us hooked till the end.

Director Amit K Shiva has yet again perfectioned the storytelling with “Jogan” and has created a massive buzz. The screenplay by Mr. Shiva is exceptionally powerful and compliments his Direction as well. The song has already created a huge hype on social platforms. He also mentions the cast has beautifully painted the dynamic and sensual eternal love story while keeping intact the imperial and traditional essence of the song.

The project head Mr. Rajiv John Sauson, was very confident on “Jogan” that it will resonate with the young couple which surely has.

Also, Music and creativity run in the blood of Mujtaba Aziz Naza, the vibrant singer of “Jogan”. His forte is Qawali, and has shared his vocals with Sanjay Leela Bhansali’s Qawali “Aayat”, AND “Deewani Mastani” from “Padmavat” and “Ek Dil Ek Jaan” from “Bajirao Mastani” which was humongously popular and now “JOGAN” which has given him added popularity.

Suresh Bhanushali and Photofit Music weave an impassioned tale of heartache, longing, and the power of music. The lyrics have music in them and hence can be categorized as a lyrical song adds Mr. Rajiv John Sauson, photofit Music

Photofit is a leading music company that purely works on talent in any genre of music. With the success of this song, Photofit Music has certainly achieved a milestone.