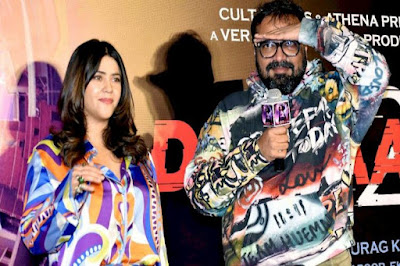 Filmmaker Anurag Kashyap, who has made a superhit films like Gang of Wasseypur, is coming with his new film ‘Dobaara’. The lead actress in the film is Taapsee Pannu, who was recently seen in the biopic of former Indian women’s cricket team captain Mithali Raj. The film did not get much response but Taapsee has high hopes for the film again. The cast of the film Dobara launched the trailer of the film on Thursday. During the trailer launch of the film, Anurag Kashyap spoke about many big things which were quite serious.

Things are not going well in Bollywood at this time. The audience is not going to the theater to watch the movies. Big films like Shamshera are also flopping. Why is this happening? Talking about this serious problem in Bollywood, Anurag Kashyap shared his views and said that films related to their roots are no longer being made in Bollywood. English-speaking people are making Hindi films that are unable to connect with the audience. Hindi cinema has to return to its roots.

Anurag said that the people who are making Hindi films themselves do not speak the Hindi language. The roots of Hindi films are related to Hindi society. Hindi is not the root of films. When you watch Tamil, Telugu, and Malayalam movies, they are rooted in their culture, be it mainstream culture or non-mainstream culture. But our films have no roots.

He further added, “Here people who can’t speak Hindi, who speak English, are making Hindi films. Wherever films take root, they work. When our mainstream filmmakers make films of their kind, So they work. Gangubai Kathiawadi and Bhool Bhulaiyaa 2 worked because both filmmakers made the kind of films they usually make. Other filmmakers are striving to make the movies they usually are Not only. They are trying to influence, changing genres. The moment we take root, our films will work.

Kashyap has been making films for more than two decades. The filmmaker, known for genre-defining films like Black Friday, Gangs of Wasseypur, and Dev D, is making a science-fiction effort with Do Baara.